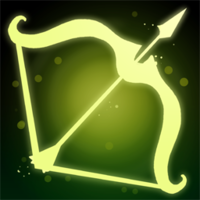 The Archer is a ranged weapon specialist. He is there to rain fire down on the enemy while the tank holds the aggro of for them. The Archer however also has a series of spells from self heals to combat spells that support his damage. The Archer on Archlight unlike the Paladin on Real Tibia has a stronger damage tray but lower healing tray. The Archer will have a high damage output with decent survivability allowing them to be a very powerful mixed threat from afar.

Archer Soul Rune:
Flaming Split Shot - Shoots an arrow at a target, splitting when it hits them into 3 arrows hitting other targets for fire damage. After use will also increase the Archers movement speed by 20% for 5 seconds.

This is a glass cannon type of a build. You can change strength and haste for vita and resto and still get a decent result.
1) Arcane > Increases spell damage. to 80, for early game only while setting up strength/haste.
2) Strength > Increases weapon damage. Strength is the archer's primary damage stat, you want to get this as high as possible in the long run for most damage
3) Haste > Haste increases attack speed which synergizes with strength stat beautifully, also scales with the archer soul rune to further increase your attack speed.
4) Vitality > Since your exura san scales with health, More health = more healing
5) Restoration > Increases the amount you are healed (Self explanatory)
6) Precision > Crit chance (+30% damage on spells/weapon)
7) Runemastery > This will increase the damage of your soul rune as well as infinite SD, not the best source of damage on an archer but it will proc your frenzy feat for more attack speed.
8) Brewmastery > Juicy potion heals
9) Intelligence > Good for E-ring Swaps
10) Focus > Good way to increase your power once you have all the other stats.

Specializations can be unlocked after obtaining the three Promotions and Awakening.

The Longshot is a skilled marksman version of the Archer. He excels in keeping distance from his targets while dealing high single target damage.

The flurry is a quick shot Archer, who is capable of releasing countless arrows in a large area in a short amount of time. Essentially he is a more AOE focused version of the Archer.

After reaching awakening you will get "Awakened spell points" every 10 levels that you can spend on spells to increase their potency and give them special effects, these spells will be marked with